The most interesting facts about rock musicThe creators of the famous band Offspring when choosing a guitarist were guided by far from musical interests. They just wanted to buy alcohol unhindered. The fact is that at… 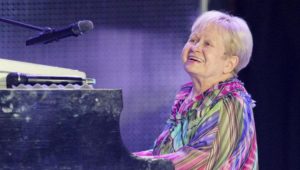 Alexandra Pakhmutova is a popularly respected and beloved composer. Her works have become a symbol of the Soviet era. Now it is impossible to imagine the culture of the country without the songs “Hope”, “Tenderness”, “How young we were” or “Old Maple”. These and many other wonderful compositions lived, live and will live among us. Alexander Pakhmutova wrote many wonderful pieces of music. The biography of this wonderful woman will be presented in this article. Childhood years Pakhmutova Alexandra Nikolaevna was born in 1929, on November 9, in the village of Beketovka, Nizhne-Volzhsky Krai. Her father, Nikolai Andrianovich, worked at the sawmill and was seriously engaged in music, and her mother, Maria Ampleevna, supported her husband’s passion in everything. Since her childhood, Alexandra had an extraordinary talent. She managed to write the first tunes at the age of three. Two years later she wrote her first work for piano – “Roosters sing”. When the girl was seven years old, in 1936, she entered a music school. There she studied until the beginning of the Second World War. From 1942 to 1943, Alexandra Pakhmutova lived in an evacuation in the city of Karaganda. There she continued to study music. At age 14, the girl arrived in the capital. She entered the Central Music School of Moscow. Here, Alexandra attended piano classes and a circle of young composers under the guidance of N.I. Peyko and V.Ya. Shebalina. The girl’s brilliant musical abilities were obvious to everyone. Studying at the Conservatory At the age of 19, Alexander Pakhmutov, whose biography is examined in this article, entered the Moscow State Conservatory named after Peter Ilyich Tchaikovsky, at the composition department. She studied with Professor Shebalin Vissarion Yakovlevich. In 1953, Pakhmutova graduated from the conservatory, and three years later – graduate school. She defended her thesis, the subject of which was the study of the score of the opera M.I. Glinka “Ruslan and Lyudmila”. Variety of genres Pakhmutova Alexandra Nikolaevna worked all her life in various genres. She wrote compositions for a symphony orchestra (Overture “Youth”, “Russian Suite”, Ode to light a fire); works of cantata-oratorio type (“Vasily Terkin”, “Detachment songs”, “Red Pathfinders”). On the basis of her music was created the ballet “Illumination”, staged at the Bolshoi Theater, in 1974. Many other works written by Alexander Pakhmutova. The biography of this woman is connected with constant creative activity. She composed instrumental music for numerous films: “Apple of Dissension”, “Girls”, “Ballad of Sports”, “Closing of the Season”, “Three Poplars on Plyushchikha”, “Family of Ulyanovs”, “Oh sport, you are the world!” and so on. Songs of Alexandra Pakhmutova This musical genre is of exceptional importance in the work of the composer. In her songs, Aleksandra Nikolaevna raises humanistic themes and embodies them in a lyrical vein. She knows how to give her works a special intonation, which has a unique impact on people. In her work there is a melodic “zest”. According to Svetlanov Yevgeny (famous conductor and composer), she “falls in heart” and “remains in consciousness for a long time”. The composer Alexandra Pakhmutova herself creates all scores of her own songs. She believes that without a melodic talent, the composer in the song has nothing to do. The Creator must be responsible for the fate of his work from beginning to end: for the development of its “thematic grain”, the creation of a musical score, and the recording in a studio. The most famous songs More than four hundred songs written by Alexander Pakhmutova. The biography of this woman is decorated with the creation of the most touching and inspiring works. The most famous and favorite of them: “Belovezhskaya Pushcha”, “The Cherry Orchard”, “Heroes of Sport”, “Tenderness”, “Eaglets Learn to Fly”, “Hope”, “My Friend”, “Our Destiny”, “Sail Scarlet” , “Well, wait a minute”, “Temp”, “Noise of bread”, “Old Maple”, “Snow Maiden”, “Listen, mother-in-law”, “Russian Waltz”, “Northern Song”, “Good Girls”, “I can not “,” Smolensk Road “,” Bird of Happiness “,” Over the Angara “,” Goodbye, darling “,” Cutting Edge “,” My Beloved “,” On the Rise! “,” Passed the Years “,” How Young We Were ” and many others. The songs of Alexandra Pakhmutova are written on verses of the most eminent poets of the country: Mikhail Matusovsky, Lev Oshanin, Rimma Kazakova, Yevgeny Dolmatovsky, Robert Rozhdestvensky, Alexey Lvov, Inna Goff, Sergey Grebennikov. Song “Tenderness” This one of the most famous and beloved songs of the people arose quite by accident. When the recent graduate of the Pakhmutova Conservatory, Alexandra, was offered to write music for the painting “Three Poplars on Plyushchikha”, she decisively refused. The plot of the movie did not inspire her at all. Photos of Pakhmutova Alexandra demonstrate the diminutiveness of this woman. However, in such a fragile body is hidden remarkable character. The composer changed her point of view only after watching the movie.